Premier League Games Destined to be Played Behind Closed Doors 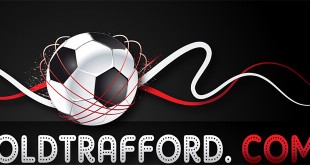 In a week which saw the league’s top two placed teams go head-to-head twice within the space of 4 days and a twelve goal thriller take place at Reading’s Madejski Stadium, it seems incredible that the fans should yet again manage to steal the show with yet more shameful antics, which is becoming commonplace in English football. With that said, the question needs to be asked, is English football in danger of going the way of so many other European leagues, where racism is not only an occurrence, but a regular one?

Of course, the media cannot be freed of the blame. Whilst they will happily condemn the actions of anyone deemed to be less than 100% respective of their fellow professional and beat the drum of any campaign aimed at reducing and ideally ending racism in sport, the sensationalism with which it is dealt is no doubt more in aid of selling additional newspapers, whilst filling the back pages with scintillating and eye-catching headlines.

Sadly, in an incident which adds further fuel to the fire, Chelsea yet again find themselves embroiled in a racism scandal, this time involving a fan who made a racist gesture in the direction of one of Manchester United’s black players. With so many incidents beginning to pile up, is there really anything that can be done? Are we at the stage where the only way in which to spare society from those who quite frankly aren’t deserving of inclusion in it, is to have games played behind closed doors? 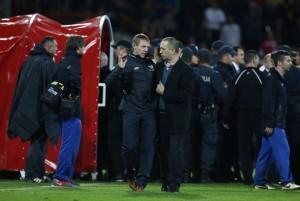 As the FA awaits the possibility of charges being brought against the players and staff involved in last month’s post-match scuffles in Serbia, an incident no doubt brought about by the clear frustration of England’s black athletes yet again faced with the idiocy and ignorance of the so-called ‘minority’, there is no doubt that the culture of football is currently in as dark a landscape as it was when the English league was first blessed by an influx of black players, and the likes of John Barnes were met by bananas being hurled onto the pitch.

The recent accusations raised against Premier League referee Mark Clattenburg prove that whilst the attention placed on racism in our game may be with the intention of bringing it to an end, all it does it heighten sensitivity to the issue. One would hope that a professional referee would be free of such idiotic on-pitch issues. However, regardless of the outcome of the enquiry, no-one wins. Either we are faced with individuals now making false allegations (a matter which will once again more than likely end up in court), or we are now unable to put a football match on in which the players, fans or officials can be trusted to treat us all to the game we deserve, without the green pitch becoming a political, social and cultural battlefield. 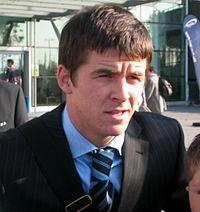 To make matters worse, none of football’s governing bodies seem capable of dealing with the matter appropriately. Joey Barton raised the issue recently via his most favoured Twitter account, suggesting that the FA’s interpretation of racism is that it is substantially less of a problem than the actions he committed on the final day of last season. Granted, Joey Barton is no saint and certainly doesn’t deserve or need justifying; with that said, the ongoing implications of his aggression towards Sergio Aguero and Vincent Kompany are far less meaningful than the charges brought against John Terry, Luis Suarez and Mark Clattenburg. This still did nothing to prevent the FA from handing Joey Barton a 12 match ban, whilst Suarez was punished with an 8 game suspension and Terry will be absent for just 4 of Chelsea’s competitive matches in English competitions.

So, where exactly are we at with the modern game of football? Is football mirroring society or does football have such an influence nowadays that society may begin to mirror football? After all, we now live in an age where the infidelity of top flight footballers is seen as fair game for open debate in the house of commons, whilst ever soaring wages in an era of economic struggle are sure to be far more appealing to growing youngsters than the prospect of an endless job search in pursuit of an endless 9 to 5.

The 2012 Olympics brought with it incredible sporting fanfare; whilst the British media lauded every single moment as yet another example of the spirited support of the great British public, the majesty of physical achievement and the sheer wonder of the entertainment that sport is capable of creating. Without doubt, this is a far cry from the weekly damnation cast upon our English Premier League and whilst it is easy to explain away such attacks as little more than the media knowing that controversy creates cash, is it not time that we began to discuss the greatest problem at the heart of our game?

Most of us seem to have forgotten that it is exactly that, a game; an experience which should be enjoyed, an experience which (to the likely contempt of the late, great Bill Shankly) is not a matter of life and death. Last season saw a matter of life and death take place on the pitch and it brought football together as a community, reminding us that we are all lucky to enjoy the pleasure of seeing such impressive displays of sporting prowess on a weekly basis. This is what the FA need to instil back into the game. Managers need to be reminded of it, owners need to be reminded of it, the players need to be reminded of it; but, first and foremost, it is up to us as fans to remind ourselves of why we fork out money for the privilege of seeing some of the world’s greatest players do what they do best. Is our hard earned money spent towards revelling in a display of hatred for others via our own vitriolic chanting, or is it to see the pinpoint passing of Paul Scholes, the lightning pace of Theo Walcott, the dominating power of Yaya Toure and the sheer brilliance of the English Premier League?

I leave the question open to you, the fans. Because, now more than ever before, your voice matters, for the future of the game we all love so much.

About the Author: Mark James attended his first Manchester United game in the mid 80s. He has been a regular visitor to Old Trafford for more than two decades and has developed a passion for sports writing since leaving University with an Honours Degree in Media Studies. As a dedicated writer, Mark has been published in UN sponsored business magazines on behalf of International Tourist Boards, dramatically boosted the online present of e-commerce companies around the world and continues to share his love of Manchester United with blogging communities across the internet. Available via a number of freelancer hire sites, Mark can be contacted through his leading online profile available here..

Let us know your thoughts...
Previous Chelsea to Blame for Loss to Manchester United, Not Referee
Next Standing Up For Football