Phil Jones: Too Good for Defence

Thiago Alcantara on his way to Manchester United

Manchester United Transfers: Under the Microscope

Despite repeated attempts to remind his ageing manager of a preferred central defensive role, it seems that Phil Jones may need to get used to the prospect of a career spent at the centre of midfield.

United fans have continued to bemoan the lack of solidity and strength at the heart of our team. Regardless of how cutting Anderson’s passes are, how sprightly Ryan Giggs continues to look whenever utilised or how consistently controlled and influential Michael Carrick becomes, very few see the centre of the park as our strong point. Sadly, despite my constant efforts to assert a different viewpoint, it’s one which isn’t going to die down anytime soon.

This argument has gone on since the opening day of the season when Marouane Fellaini was able to dominate every touch of the ball and will likely continue to take place every time we face a team containing the likes of Everton’s Belgian star, Yaya Toure, Cheik Tiote or any other powerhouse Premier League midfielder.

However, recent games have suggested that Old Trafford has played home to the suitable candidate all along, with a re-emerging Phil Jones demonstrating strength, control, focus and a remarkable level of composure for a player still taking the earliest steps of what is sure to be a long and illustrious career. In addition to keeping Gareth Bale quiet at Old Trafford and more recently tracking Cristiano Ronaldo to the nth degree in Madrid, Jones was able to do what no one could as we kicked of our Premier League campaign; he made Fellaini look utterly insignificant in his ability to bully the heart of the midfield. 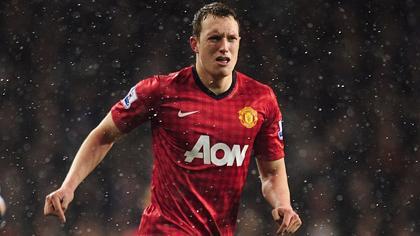 Phil Jones clearly sees his future role in the centre of defence, rightly so, in my opinion. He has been pointed to by Alex Ferguson as a player who has a far greater talent for the game than John Terry did at the same age. In fact, when you look at Jones, it is easy to see an ironic blend of England’s onetime centre back pairing, with the former Blackburn star possessing the strength and leadership of the Chelsea man, whilst also having the control, vision and ability to burst forward like a young Rio Ferdinand.

The problem for Jones will be that such skills make him a greater asset and perhaps his greatest worry will be the prospect of developing into the ultimate utility man; clearly a role Jones is happy to commit to at present, but not in the long term.

When he first arrived at Old Trafford, it was apparent that Jones would be set for great things. Within six months of setting foot on the famed turf, Jones was being spoken of in the same light as Duncan Edwards, by no less than former Busby Babe, Bobby Charlton. It is this similar build, power and movement with the ball which arguably makes Jones too good for centre back and more so a player who will go on to control the midfield of hundred of Manchester United games in the future.

Whilst Jones clearly has a crush on the centre half position, his talent may place him in a more pivotal role for club and country, leading the midfield line as one of the greatest players our country will ever see. Jones is that good and, arguably, simply too good for defence. As always, we would love to hear your thoughts.

About the Author: Mark James attended his first Manchester United game in the mid 80s. He has been a regular visitor to Old Trafford for more than two decades and has developed a passion for sports writing since leaving University with an Honours Degree in Media Studies. As a dedicated writer, Mark has been published in UN sponsored business magazines on behalf of International Tourist Boards, dramatically boosted the online present of e-commerce companies around the world and continues to share his love of Manchester United with blogging communities across the internet. Available via a number of freelancer hire sites, Mark can be contacted through his leading online profile available here..